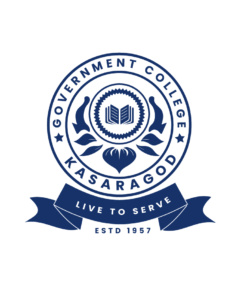 Government College Kasaragod was established in 1957 by the Government of Kerala, as a need was felt for a college in this underdeveloped area. In the beginning, there was no facility of its own, so the classes were conducted in a local high school in Kasaragod town. It was the then Education Minister Prof. Joseph Mundasseri who took the initiative in the matter. The College commenced functioning early in August 1957 in a corner of the High School building. Prof. V. Gopalan Nair took over as the first Principal of the college on 08-07-1957. The College was declared open by the Honorable Minister of Finance, Sri. C. Achutha Menon on 07-08-1957. Prof. V. Gopalan Nair was succeeded by Prof. K. S. V. Shenoy as the principal. For starting Degree classes in Economics and Mathematics,

Steps were taken to speed up the construction work of the proposed new campus at Kunhimavu Katte where 30.56 acres of land had been acquired for this purpose. Prof. K.S.V. Shenoy was succeeded by another stalwart Prof. Karimpuzha Ramakrishnan, under whose stewardship the College started gaining importance as a premium institution of higher learning. During this time the institution became a full-fledged first-grade college with the opening of three-year degree classes. As of now, the college offers 14 undergraduate courses, 8 postgraduate courses and 6 PhD programmes. College is reaccredited with NAAC ‘A’ grade in 2013. In 2021, the college was ranked 82 among all colleges in India under the National Institution Ranking Framework (NIRF).

“We are guided and inspired by a glorious vision to use our physical, mental and Intellectual energies to the advancement of the individual and the society, to strive for the noble cause of education, truth and righteousness, to instil a sense of pride and emotional belongingness in the mind of every individual.”

“Our Mission is to achieve the overall development of the students with a focus on knowledge, skill and the right social attitudes and service-mindedness required for attaining excellence in personal as well as social life.”

NUMBER OF STUDENTS IN EACH DEPARTMENT